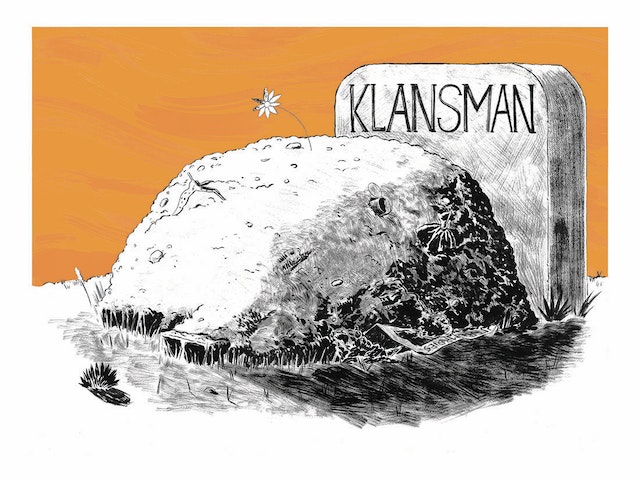 Mark Thomas Gibson, “Everyone Should Have One on Their Wall: Sunset,” 2021
$500.00
Purchase
The New Art Dealers Alliance (NADA) is excited to present a new limited-edition print by artist Mark Thomas Gibson in support of NADA’s year-round programming.
“A portrait of a klansman two feet under in a shallow grave. We all can imagine who he is to us. Insert your own narrative here and hang it on your wall. Frame the condemnation of White Supremacy on your wall. It is a statement about where one stands.

‘Everyone Should Have One on Their Wall: Sunset’ is part of a larger project, ‘Everyone Should Have One On Their Wall,’ a series of objects produced in several mediums and scales in an attempt to find themselves physically present in the lives of others. In its ability to reinterpret history through repetition, imagery, and narrative language, Art has the power to remake history. This is the case with White Supremacy in western culture as it relates to race. Too often, images project sacrifice, martyrdom and cruelty, shifting the viewer into a sense of inactivity or voyeuristic acceptance on the matter. This piece combats the persistence of this memory, and creates a new narrative in its place.”

The edition was printed in collaboration with NADA Member EFA Robert Blackburn Printmaking Workshop, New York. Mark Thomas Gibson is represented by NADA Gallery Members M+B, Los Angeles and LOYAL, Stockholm.
Mark Thomas Gibson
“Everyone Should Have One on Their Wall: Sunset,” 2021
4-color screen print
13 x 18 inches
Edition of 50
Signed and numbered by the artist
Printed by EFA RBPW
$500

Edition will be available for distribution by the end of March.